Greece in the grip of freezing weather: snow also in Athens

Millions of snow flakes have been falling in the north suburbs of Athens and the surrounding mountains since the early morning hours. Mount Penteli and Parnitha are topped white, temperatures in the North of the city are near the freezing point. In some roads, vehicles move with snow chains.

With or without snow, fact is that temperature plunged 10 degrees Celsius within 24 hours, exactly as the Weather agencies had forecast.

very good point about the vulnerable needing extra help, and the strays .. 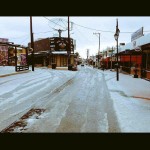